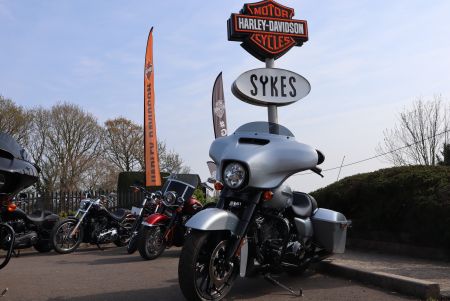 In late 2017, after a 15 year ownership by John Shaw, Shaw Harley Davidson was purchased by John & Denise Sykes. After a successful and exciting two years, John & Denise, along with all of us at the dealership, felt it was time for an official name change. Accordingly, we feel as though this is a good opportunity to give some insight into John's history with Harley-Davidson Motorcycle's, as well as take a look at what new introductions and changes John wishes to bring in the future!

Having started riding when he was just 16, John purchased his first Harley-Davidson in 2003, a 100th anniversary Silver and Black Fatboy, while living in America. Eager to rack up miles, John & Denise took part in "The Big Ride Home", an 830 mile trip from Pennsylvania to Milwaukee, the home of Harley-Davidson, to celebrate the big anniversary. Over the next few years John added to his collection of bikes with a couple of Harley's, along with a Triumph Rocket (we all make mistakes!). However, in 2006 the time came for the family to move home to East Sussex, and while John had to leave most of his bikes, he made sure to bring home his beloved Fatboy so he could continue to ride in England.

Over the next few years, John & Denise would embark on a variety of tours, eventually passing the biking bug to their eldest son Michael. Passing his test in 2013, Michael joined them on a second "Big Ride Home" to Milwaukee later that year to celebrate the 110th anniversary of Harley-Davdison. Continuing with this passion, Michael purchased his first Harley in 2018, shortly after the family acquired the dealership. John & Denise's youngest son has also recently passed his test, and is looking forward to start riding with family and the chapter.

This enthusiasm and zeal for the brand has seen a variety of changes implemented since the family joined the dealership. Eager to expand the bike fleet, a new mezzanine  and ramp have been built into the warehouse to help increase our capacity and bike manoeuvrability. We have also seen an increase in staff to aid in our expansion of the parts department and sales division. Furthermore, continued investment into the dealership has allowed us to expand our product offering to include trikes, along with the addition of the much loved coffee machine! In order to increase our brand awareness and involvement with the local chapter we have introduced a variety of events throughout the year, such as Sunday Funday's and bike launches.

We are excited for what the future holds, with a variety of developments over the coming months. Most notably, the expansion and renovation of the main shop floor area, along with the extended car park. Furthermore, we will be becoming one of the only Electric Vehicle dealerships in the UK, with the arrival of Livewire later this year.

We would also like to thank you for your continued support throughout this period. The changes and success over the past couple of years would not have been possible without you!