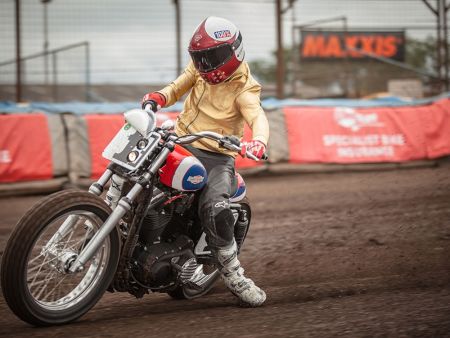 This follows North One Television’s recent acquisition of DirtQuake and the announcement of the television company’s plan to expand the event into a global brand.

DirtQuake is an alternative motorsport festival that encourages a diverse blend of bike fans, dirt racers, grease monkeys, celebrities, custom shop designers, speed freaks and weekend warriors to celebrate their shared love of motorcycles. The racing action takes place on high-adrenaline, loose-surface oval circuits without the hassle, rules and costs usually associated with motorsport. DirtQuake encourages affordable, enjoyable grass roots racing with the instinctive pleasure of riding motorcycles at the heart of it all

Harley-Davidson has a strong commitment to the grass roots racing philosophy of DirtQuake – as a company its own DNA was laid down by the exact same competitive spirit – and supporting events such as Flat-Out Friday, Hooligan Racing and the Mama Tried event (which takes place in Harley-Davidson’s domestic market) is key in connecting with an important new demographic of both the riders taking part and those looking on as spectators, or rather those who share a love for all things motorcycling but especially Harley-Davidson motorcycles.

For fans of Harley-Davidson, motorcycling and fun, DirtQuake is an event not to be missed. DirtQuake takes place 7-9 July 2017 at the Adrian Flux Arena, Kings Lynn. Harley-Davidson®will be in attendance with products and a lineup of riders consisting of media and guests competing on a range of Harley-Davidson motorcycles including the new Street Rod equipped for flat track racing. If you can’t make it to this fun-tastic event, then make sure you don’t miss the action on ITV4 on Wednesday 12th July 8pm.