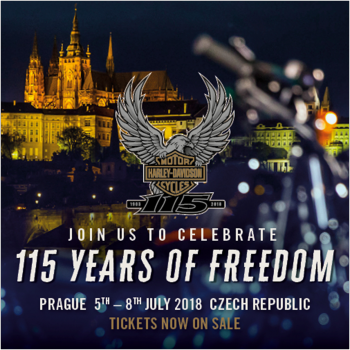 The 115th Anniversary will be a party for the people; the owners and fans of Harley-Davidson®and motorcycling in general. Motorcycling is all about riding, racing, meeting new friends and connecting with people who share the passion of two-wheel freedom. So all motorcyclists, on any bike – and especially anybody that hasn’t started riding yet – are welcome to join the Harley-Davidson®celebrations. For all the important and updated information about the two 115th Anniversary events, please visit: www.h-d.com/115

The 115th Anniversary celebration event in Prague crowns a portfolio of large-scale events managed and delivered by Harley-Davidson throughout Europe – including European Bike Week in Austria, where over 120,000 people celebrate motorcycling and music over a week in September. It is fitting then, that Prague is the elected 115th Anniversary venue because the Harley-Davidson®brand has a long history with the Czech Republic. Prague is home to the world’s oldest H-D club – Harley-Davidson®Club Praha has been in existence for 90 years.

Part of the event celebrations will be a 115 years special collection of over 150 Harley-Davidson®motorcycles on display at the Expo, which will transport visitors on an interactive journey through H-D® history from the very roots set down in 1903. The 2018 range of Harley-Davidson®motorcycles will also be on show, with test rides –– available from the H-D Demo Truck.

For H.O.G.® members, the H.O.G. village sits at the heart of the action while the Dark Custom Arena combines blacked-out paint with adrenaline. Live acts are primed to play a mixture of rock and blues, reggae, rap, Czech and Slovak music and the action-packed motorcycle Stunt Show is guaranteed to get the blood pumping hard. For further H.O.G.® news visit the recently launched H.O.G. UK & Ireland Facebook page.

Stopping traffic on Saturday 7th will be the Parade. This organised mass ride will see thousands of Harley-Davidson® motorcycles ride through the historic Prague city centre. An absolute highlight, the Parade is sure to be over-subscribed – entry to the Parade is via a ballot and by purchasing a Rally Pack – so please bear this in mind. To purchase tickets and rally packs visit The Rally shop here.

The traditional Custom Bike Show throws a
spotlight on the ultimate in two-wheeled creativity and, as Harley-Davidson is
not just for adults, the Family Zone adds smiles to young faces. For bigger
kids the Biker Games put riders’ skills on display but with a competitive edge!

The 2013 110th Anniversary event
held in Rome was a spectacular event and still talked about today. An estimated
100,000 Harley-Davidson fans flocked to the Eternal City to attend one of the
biggest events ever hosted by the company in Europe. The 115th
Anniversary will surely eclipse this. Prague: home of the European 115th
Anniversary party. See you there.