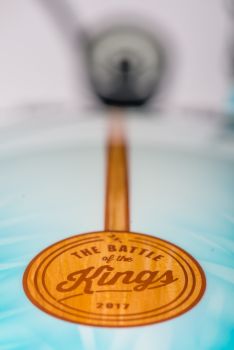 Harley-Davidson has today launched the fourth annual installment of the Battle of the Kings custom bike build competition and, for the first time ever, we are looking to partner with a customer to give them not only a unique customised Harley-Davidson, but also the chance to win back their full customisation budget spend of up to £5,500.

If you’ve been thinking about coming to chat to us about creating your one-off dream machine for a while, there’s never been a better time to make the commitment. And with this year’s theme confirmed as the 115th Harley-Davidson anniversary, you have 115 years’ worth of custom and iconic bikes for inspiration.

The finished bike will range in price, depending on which base model we agree on as your blank canvas. The bikes eligible for Battle of the Kings 2018 are Harley-Davidson Sportster® Dark Custom® models Iron 883™, Forty-Eight® and Roadster™. Street® 750 and Street Rod® are also included plus the Street Bob® and Fat Bob® from the exciting new line up of all-new Softail® motorcycles.

All you need is an idea for the custom you’d like to create – inspired by a Harley-Davidson motorcycle from the last 115 years of Harley-Davidson bike-building – and we’ll do the rest. There are a few rules *aka T&Cs* we have to be follow to qualify for a Battle of the Kings entry but we can take you through those in full.

Customers old and new of Shaw Harley-Davidson who would like to commission a Battle of the Kings custom machine need to call in and see us by the end of October to allow enough time for the bike build to be completed by 31st December before going forward to public voting in January 2018, followed by the deciding vote of an independent judging panel. If your bike wins the competition outright, you will also win back your customisation budget of up to £5,500. Oh, and don’t forget that even if you don’t win, you’ll have a unique custom Harley to ride around on.

Click here to see examples of previous Battle of the Kings creations.

1.2By entering this Competition you agree to these terms and conditions.

2.Who can enter this Competition?

2.1The chance to win the prize is open to all residents of the United Kingdom and the Republic of Ireland.

2.2The Competition is not open to directors, members, partners, employees, agents or consultants of Harley-Davidson Europe Limited, any person who directly or indirectly controls or is controlled by Harley-Davidson Europe Limited, or any supplier of goods or services in connection with the Competition, or the spouses, life partners, business partners or immediate family members.

3.2The motorcycle customization design idea should take inspiration from 115 years of Harley-Davidson motorcycle heritage and only the following models may be used for the customization: Street 750, Street Rod, Iron 883, Forty-Eight, Roadster, Street Bob or Fat Bob.

3.3After considering all entries it has received, each dealer shall pick a winning customization idea submitted from one of the participants and shall notify the winner by no later than 3 November, 2017. There shall be only one winner who will be picked by the dealer to have their bike entered into the UK & Ireland Battle of the Kings competition.

3.4The maximum retail price for the customisation budget is £5,500.00 (five thousand and five hundred pounds only or EUR 6,000.00 for the Republic of Ireland) covering all parts, accessories, paint, fabrication, labour and any other elements associated with the custom build whilst at least 50% (value) of the parts and accessories fitted must be official Harley-Davidson product.  Any motorcycle with a customisation price exceeding this value will be excluded from the Competition.

3.5The winning participant shall be required to purchase the motorcycle and customization agreed with the dealer from the dealer to be fully entered into the Competition.

3.10If the motorcycle finishes in the top 5 of the competition, the customer agrees for the motorcycle to be made available for a period of three weeks during November 2018 for exhibition display purposes (date to be confirmed with exhibition organisers and advised by 30 May 2018).

4.1Harley-Davidson Europe Limited reserves the right to amend the rules of the Competition, to withdraw the Competition at any time if circumstances beyond its control make this unavoidable, or to cancel a prize or discount in the event of non-compliance.

4.2By entering this Competition, you agree to these terms and conditions without exception. If you require any help or have any enquiries relating to these rules please contact Harley-Davidson Europe Limited its registered address indicated at clause 1.1.

4.3As far as the law allows, neither Harley-Davidson Europe Limited, its respective associated companies (including authorized dealers), nor the directors, officers, employees or agents of the aforementioned shall be liable for any loss or damage, whether direct, indirect, consequential or otherwise, arising from any cause whatsoever which may be suffered as a result of entering the Competition, the provision of the prizes, or any act or omission of any other person.This 4.3 does not purport to limit or exempt the Harley-Davidson Europe Limited for any loss directly or indirectly attributable to its gross negligence or that of any person acting for or controlled by it.

4.4Harley-Davidson Europe Limited’s decision in respect of all matters to do with the Competition will be final and no correspondence will be entered into. Any disputes will be subject to the exclusive jurisdiction of the courts of England and Wales.

4.5Personally identifiable information (including e-mail addresses, names, addresses, etc.) that is submitted by entrants as part of this promotion will be used only to administer the promotion, select prize winner and fulfill the prize, and will be treated in accordance with all applicable data protection laws and the promoter’s privacy policy accessible at www.harley-davidson.com.