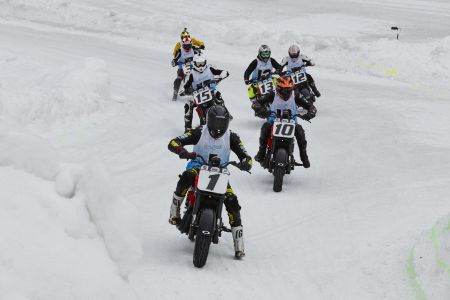 Snowquake follows a similar race format as the original DirtQuake race series, where four categories of bikes compete to net a winner from each category. The categories took the form of: Inappropriate Road Bike, Vintage, SnoPro and, of course, Harley. The main difference between the oval-run flat track-based DirtQuake and SnowQuake is that the ice event is run on a corner-filled, twisting track with elevations. Which makes for even more spectacular action and fun.

The Harley class for media and invited guests was supported fully by Harley-Davidson. The supplied race bikes were the same Street Rod bikes converted to flat track specification for last year’s DirtQuake. Saying that, the bikes featured even more race spec modifications, mostly to suit the ice conditions…

For the race and custom fans amongst us, and an indicator to similar styling and performance modifications that can be provided by our in house Custom Kings, here is a brief specification of the Harley-Davidson ice racing Street Rods:

As you will have read, the racing Street Rods were kitted out for maximum performance… on ice. The 15 riders from all areas of the motorcycling press across Europe, including three from the UK: John Hogan (Superbike), Kane Dalton (Bike Social) and Mark Graham (Bike). There were also several guest riders of some note e.g. Ruben Xaus, former MotoGP and WSB rider, arguably more famous for his single-handed two-wheel drifts! Enduro and all-dirt action specialist David Knight MBE also joined Team Harley-Davidson for a spot Street Rod racing on ice. The resulting race action was, quite literally, hot enough to melt ice!

The results and action highlights from this year’s SnowQuake event can be seen and heard in the comfort of your home by way of a superb North One TV programme, due to be aired next month, 7th February on ITV4 8pm (Freeview channel 24).