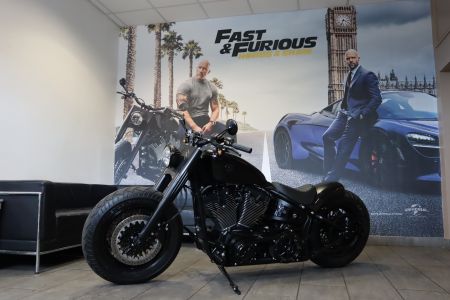 The GTB (Grand Tour Black) Fatboy was originally a customer build. However, we were approached last year by a company who source unique vehicles for films. They were after a blacked out Harley, something timeless and mean looking. Subsequently, we borrowed the GTB back from the customer (he’s a good friend of the dealership and has had quite a few custom builds from us) to loan to the company for filming.

We took the GTB up to Shepperton studios for a couple of days initially and they got the shots that they wanted. Then, a few months later they got back in touch with us, and wanted to borrow it again. This time to fly it out to LA for additional shooting (we assume because they liked it and wanted to put more of it in the final edit). Once the bike had gone to LA, photos of it started popping up on The Rock’s Instagram and people couldn't get enough! Shortly after that, the promotional images were released, and the main poster is of the Rock sitting on the bike next to Jason Statham on a Mclaren 720S. We’ve been getting loads of calls and emails about it since. Once the film premiered, we all went to see it, and there was a deep feeling of pride to see how much it was in the early scenes.

The bike is a bold custom build, featuring a variety of Roland Sand accessories, along with distinctive custom one-off features. The fuel tank is a heavily modified Sportster Tank, with Roland Sands designed engine covers and foot pegs, compliments a 110 Screamin' Eagle Engine.

2010 Fatboy Special Handlebars have been mounted on Roland Sands 4 bolt Handlebar risers. The speedometer has been upgraded to a MotoGadget Digital system, with a wiring harness relocation. A hand made, One of One, headlight backing trim plate has been created, contributing to the modern and mean look.

A custom hand made seat was also commissioned, in black leather with a perforated trim. The rear fender has been custom fabricated from the original fender and rails, reduced in length allowing the 16x5" spoked rear wheel to be exposed.

Overall, it is easy to see how this bike has been selected for the film, resonating with the timeless and modern look desired by The Fast and the Furious team.

Feel free to head down to the dealership over the coming weeks where the bike will be on display, and maybe even take some inspiration for your own custom build!